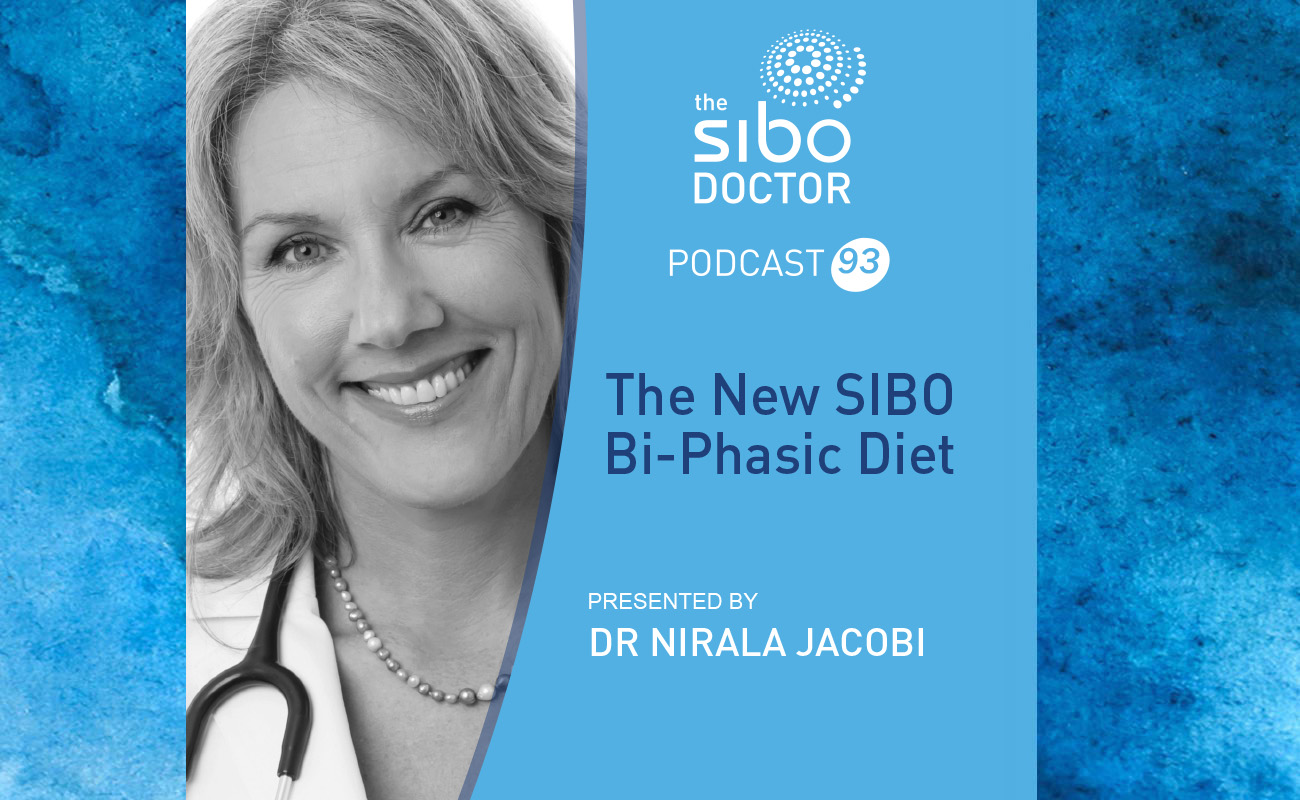 Welcome to the SIBO Doctor podcast. I'm your host, Dr. Nirala Jacobi, and this is the last podcast episode for the year 2022. And I got some great news. I've talked about this or mentioned it or hinted at it for some time now, but the Bi-Phasic Diet, which is part of a SIBO protocol that's been used by tens of thousands of people and practitioners since the last six years, we've finally had a chance to update it. And I thought I'd just take a chance to talk about the new things that are on offer and what's happening with the Bi-Phasic Diet and what's new about it and what's expanded, et cetera, so that before we part for the year, I'll also kind of review some of the podcasts that I've released this year and what we can look forward to for the next year.

As I've mentioned, the Bi-Phasic Diet, the SIBO Bi-Phasic Diet, I created that, I think it's about eight years ago now. And it's a diet that's based on the low fermentable carbohydrate diet and the SIBO specific diet and the specific carbohydrate diet. So it's a diet that's very, very successful in supporting SIBO patients, because it reduces bacterial fermentation because you're not really providing food for the bacteria. So it's a great diet in and of itself, and, as the name implies, it's a diet that comes in two phases, and those parts have not changed. We still have a bi-phasic diet. But really, the Bi-Phasic Diet generally addresses the four major gut issues that SIBO sufferers tend to have. It addresses the inflammation of the gut lining. It addresses also impaired digestion, because when you have SIBO, and the gases are really high, it can actually damage these enzymes that are living in your small intestine, on the surface of your small intestine, that are being released that are really, the last bit of digestion is done through these brush border enzymes, and they can often be temporarily damaged with SIBO.

I often like to support digestion as well. And then also, of course, the protocol. The Bi-Phasic Diet also addresses the bacterial overgrowth of the microbial overgrowth and the imbalances, and it also aims to help to reset the motility of the digestive tract. So these four areas are really important when you're dealing with SIBO. And the Bi-Phasic Diet alone, obviously, won't treat all that, but it's a kind of program that you can customize. But the diet itself is separated into these two phases that is basically quite restrictive initially, and then as you're going along the program, you're adding in more food. So, that structure hasn't really changed. But what is different, there's three new major updates to this Bi-Phasic Diet is that number one, it's now an ebook, so it's greatly expanded.

It has a lot more recipes. And the biggest change is that we combined, or that I combined the original Bi-Phasic Diet with the vegetarian diet, because I found that it just gives a lot more food options, and it's really, really helpful for people that have very restrictive diets, because it teaches you how to activate grains and how to sprout your legumes to make them a lot more digestible, and it really increases the repertoire of foods that can be eaten. So that's the biggest thing, is that I combined these two diets that were separate diets before. Also, we have new foods, because research that's come out of Monash has shown that a lot of other foods are more in the safe zone with SIBO, like konjac noodles, so we've added that in as well. Not just konjac noodles, but a lot of other foods, and increased some portion sizes.

And also, it now is a 30-page ebook, so it has a lot more resources as well. So there's tables on how to properly activate your grains and your legumes. Also, how to find a good protein powder or an egg replacer in recipes. So it's just a more complete offering. And yeah, so that's the new Bi-Phasic Diet that I'm so happy we finally have been able to release. And unfortunately, it's no longer free. It was free for all these years, but with all the updates and everything else, we have a nominal price or cost of $27 for this Bi-Phasic Diet, but because it's an ebook now. The Bi-Phasic Diet is actually a standalone sort of tool that's practitioners are using when they're prescribe their own supplements to people, but it is also part of a self-guided program for patients that don't have access to SIBO practitioners.

And it's a self-guided program that teaches you everything you need to know about SIBO and how to treat it yourself.  It gives very specific supplement guidelines or recommendations, I should say. It teaches you what SIBO is, how to interpret your breath tests, how to manage your symptoms, how to choose which supplements are correct for you for different symptoms, and how to find the underlying cause of SIBO, so that it doesn't come back. So I've totally revised this plan, the SIBO success plan, and when you enroll in this course, you also get access to the Bi-Phasic Diet, but you can also get the Bi-Phasic Diet as a separate standalone ebook. So that's kind of the update on these two products that we've released, and I've worked fairly in depth to update these products and to really give you the most recent and up-to-date information.
So even if you've had the SIBO success plan before, there's some new information in there and I've revamped and rerecorded it all. So that's the little sales pitch on the SIBO success plan and the Bi-Phasic Diet, and I really hope that it helps a lot of people out there. We know that SIBO is a condition that just seems to get a lot more awareness. In fact, I was interviewed earlier this year for somebody who wrote for Time magazine and talked about SIBO and stuff. So it's really coming into people's awareness, which is great, but it also means that there are a lot of people that are looking for information and getting a lot of misinformation. So this has always been my mission with the SIBO Doctor podcast, is to provide accurate information and to interview experts in the field and the researchers, et cetera.
Right. Yes. This year has been fairly full on, I should say. And in fact, I was reviewing for preparation for this podcast, all the podcast episodes that we've released this year, starting with, I think the first one was in February, and actually, we released it a day before we had major, major, major flooding here in the Northern Rivers area, and we are just poised on another flood as we speak right now. And I think this is obviously not unique. We've seen such crazy weather patterns all over the globe. So wherever you are in the world, I really hope that you are safe and that you stay safe as the weather gets more crazy. But anyways, I was really only just reflecting on the podcast, and there's some great podcasts that you may have missed.

Our January podcast was SIFO, or small intestine fungal overgrowth, where I talked with Dr. Ami Kapadia about the treatment of SIFO and some of the complications she finds, or some of the little pearls. That was a really great interview. In February, I released an episode about what does life look like after SIBO? What do you want to do afterwards? Which really, I like to do a lot of microbiome restoration with people. So that's also a course that we're planning to release in 2023, and you can register your interest when you go to sibodoctor.com. That's going to be a newly updated course. And then, because of all the floods in this area, we had three major events this year, I really wanted to speak with a mold expert. So I talked to Dr. Jill Crista about mold and how to properly remediate and some of the myth busting around mold. And then I had a great conversation with my chiropractor osteopath about how the body structures and where you're holding in your body can really impact the digestive tract and what that means and how that contributes to continued digestive symptoms.

Sometimes, with ongoing structural problems, you can actually have symptoms that mimic SIBO or IBS, and so how to find a good practitioner that can help you identify where you might have some scar tissue or holding pattern or that type of thing. So I thought that was a very helpful conversation with Dr. Maree Chilton. And then in June, we released a podcast where I talked about other digestive testing that I often like to use to help us or to help me really figure out what's going on for individual patients, because sometimes it's not just SIBO. There can be other issues that need addressing, like low digestive function or other overgrowths or just microbiome imbalances or detoxification imbalances, et cetera, et cetera. So have a practitioner that's specifically helpful, I think, for those, that do a lot of functional testing.
In July, I talked to Dr. Paul Anderson, an expert in chronic illness, and I wanted to talk about the chronic viral infection and reactivation and what we're seeing with long Covid and how Covid is involved in all of that, and what other digestive symptoms associated with that, so that's another really good conversation I had. And then my last conversation was with Dr. Brad Leech, who's a researcher into leaky gut and some of the new testing that's around and how to really interpret some of the microbiome testing we do, and what that tells you about leaky gut. So those were some great conversations. And moving forward into 2023, I've been very much deep diving into the nervous system and its role in keeping digestive symptoms very chronic, and I've come, in many, many of my patients, I think that the ongoing stress that we're facing can activate trauma in the body, or if you're holding different patterns and lots of different areas of the nervous system, I want to kind of explore a little bit more with expert guests on the podcast.

If you have any specific topics you'd like to also have covered, then please write to us at [email protected], because we've done a lot of topics over the six years that we have had this podcast now. So please, review the archives. There's a lot of good stuff in there. So yes, I want to thank you for your support of the SIBO Doctor and for your participation in the different forums that we have. And yeah, if you're still suffering from SIBO, I wish you really all the best and hope that you get well soon, and that you have found some little nuggets here and there with what we've talked about that helps you. And I hope that you also tune in the new year. I wish you all the best, you and your family, all the best for the remainder of 2022, and we'll meet again in the new year for a new season of the SIBO Doctor.